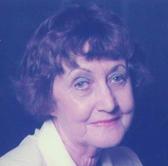 Joan was born in Sydney on 20th May 1938.  She attended many different primary schools and secondary school at Ravenswood MLC Gordon.  After attaining the Leaving Certificate she trained as an actor at the Rathbone Academy of Dramatic Art and worked in theatre, radio, TV and Film.

In 1960 Joan was cast as Catherine in “A View From The Bridge” by Arthur Miller and married her leading man Alan Dalgleish in Newcastle while on an Arts Council Tour of NSW.  They have two children . Joan attained her diploma in speech teaching with Trinity College London and taught speech and drama.

Joan began writing a long running serial for 2JJJ “Liz Farcarter Private Investigator” and a half hour comedy for the ABC called “The Silvertail Set”.  Joan says she began writing for children when she gave a home to a homeless cat.  This truly terrible feline inspired her to write “Cats Don’t Bark” which was published in 1978. Ten more books were published for children.

Around this time Joan was acting with a local group the Pymble Players and especially enjoyed playing Olive in “The Summer of The Seventeenth Doll”.  She wrote three children’s plays for their annual kids show “The Worst Christmas Fairy Ever”, “Werri Wombat and The Bush Bandit” and “Captain Incredible and The Oxygenes”.  For their 25th anniversary production she was commissioned to write a melodrama “The Perils of Purity Pimble” which has also been performed in Victoria and South Australia.

As a children’s author Joan has visited many schools to encourage children to read and write. Joan was an author with Nestle Write around Australia for two years and later toured many schools in NSW, WA and Victoria performing her one woman  show “Imagination Lift-Off” to encourage literacy.

During this time she also wrote three one act plays “Two To Tangle”, “About Face” and “The Cluttered Nest”. Also several short stories for Woman’s Day and the NSW School Magazine.

Joan moved to the Central Coast in 1992 and has lived there since.  Since 1997 Joan has appeared with the Ad Hoc Theatre, the Central Coast Theatre Company, the Wyong Drama Group and Woy Woy Little Theatre.  She especially enjoyed playing Sister Aloysius in “Doubt”, Madam Arcati in “Blythe Spirit” and her latest part Vera in “Straight and Narrow”.

Uniting Productions in Gosford will be performing “Werri Wombat” in April 2014 and have performed readings of several of her one act plays.